Needs and barriers towards implementation of Short Food Supply Chains 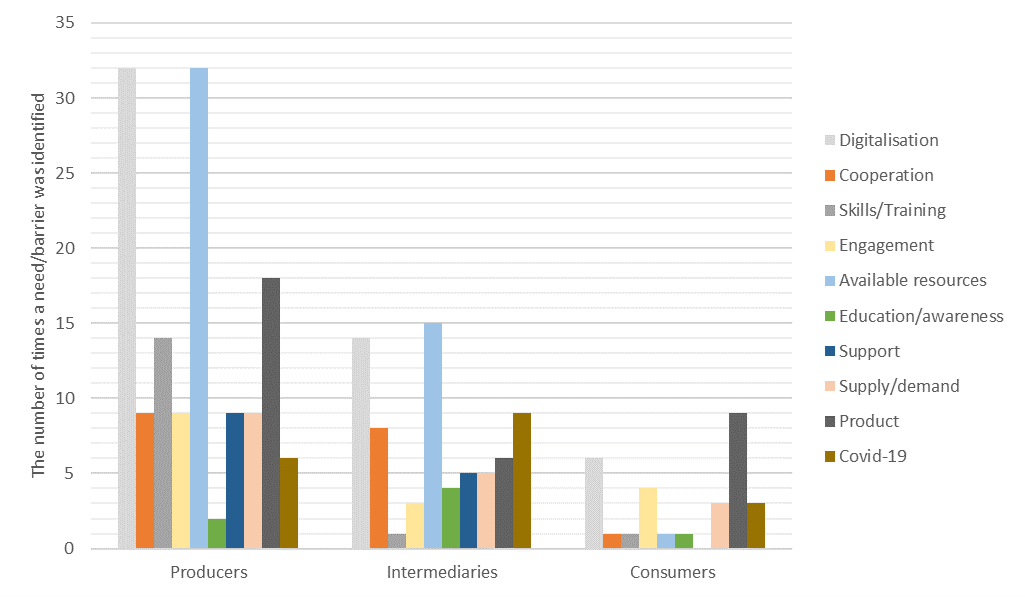 Needs and barriers towards implementation of Short Food Supply Chains

Short Food Supply Chains (SFSCs) represent a suitable alternative to conventional food supply chains and they are gaining popularity throughout Europe. Some short chains follow traditional formats such as farm sales and farmers’ markets, while others adopt more contemporary approaches such as community supported agriculture (CSA), box schemes, online sales and food hubs. There are however many and varied barriers associated with successfully establishing and maintaining SFSCs. This is because short chains differ substantially in their approaches, motivations, actors, and operation.

In the framework of the agroBRIDGES project, a report has been produced on the European and regional analysis of producer and consumer needs and barriers towards SFSCs

In order to conduct the analysis, factors that act as barriers to SFSCs were first identified from literature and across other projects. The barriers identified relate to: (1) Product Assortment and Branding; (2) Consumer Engagement; (3) Resources and Capacities; (4) Structural and Logistic issues; and (5) Governance and Collaboration. Next, an overview of the broad set of possible challenges faced by different types of SFSCs (public-led, collaborative and producer-led actors) was done. Consumer specific barriers in relation to purchasing foods from SFSCs have been identified, including: (1) inconvenience and lack of availability; (2) the high price of local food; (3) lack of time on the part of consumers; (4) a lack of trust in the authenticity of local food; (5) limited promotion; (6) limited knowledge; and (7) a lack of motivation.

Having identified the numerous barriers associated with SFSCs from the literature, the needs and barriers associated with the 12 Beacon regions of the agroBRIDGES project were examined. The Beacon regions refer to geographical areas where the project is being implemented and may cover one single region, a group of regions or the whole country.  Semi-structured interviews with three actor types, namely producers, consumers and intermediaries, were conducted within each of the regions with a total of 40 interviews held virtually.  Digitalisation has been identified as the most prevalent obstacle encountered by all actor types while other issues identified include competition from the supermarkets, high transportation costs, language barriers, increased demand for organics, lack of entrepreneurship behaviour as well as an unwillingness on the part of consumers to pay higher prices inflicted by COVID-19 issues.

This site uses Akismet to reduce spam. Learn how your comment data is processed.